Lourdes: In Search for a Miracle

At Home with Jim & Joy

The Miracles of Lourdes 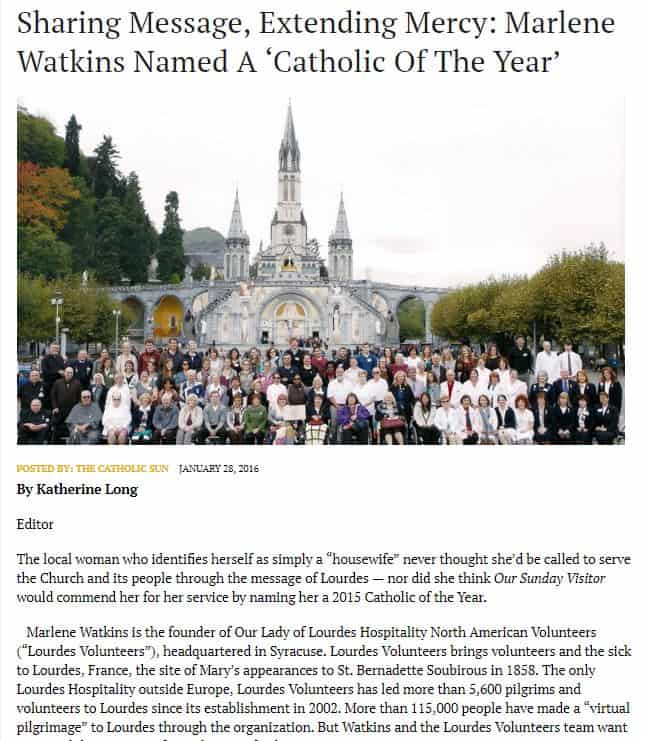 The local woman who identifies herself as simply a “housewife” never thought she’d be called to serve the Church and its people through the message of Lourdes — nor did she think Our Sunday Visitor would commend her for her service by naming her a 2015 Catholic of the Year. 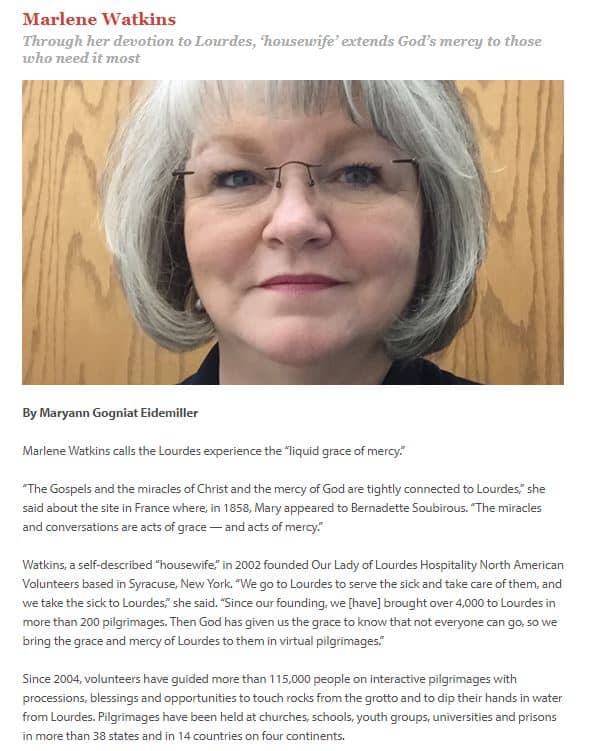 Our Sunday Visitor: 2015 Catholics of the Year

Through her devotion to Lourdes, ‘housewife’ extends God’s mercy to those who need it most. 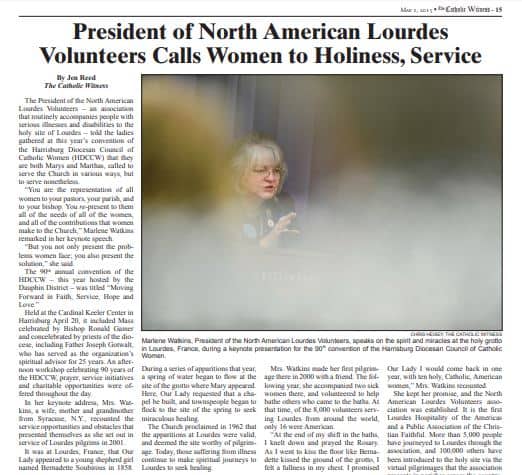 The President of the North American Lourdes Volunteers – an association that routinely accompanies people with serious illnesses and disabilities to the holy site of Lourdes – told the ladies gathered at this year’s convention of the Harrisburg Diocesan Council of Catholic Women (HDCCW) that they are both Marys and Marthas, called to serve the Church in various ways, but to serve nonetheless. 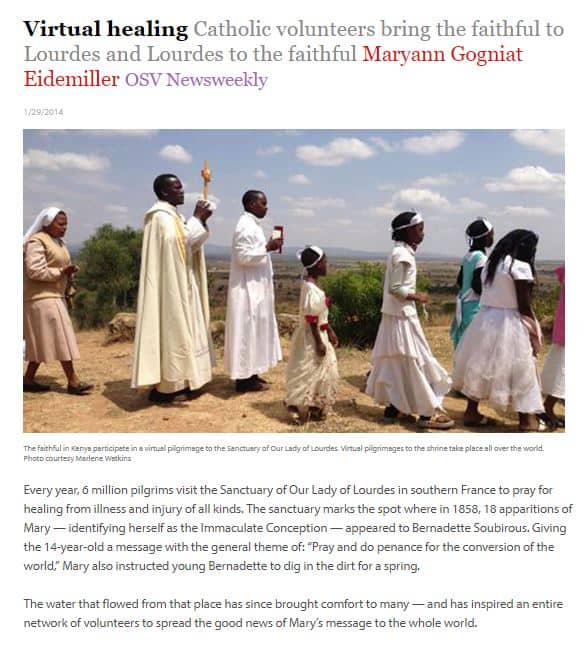 Virtual Healing: Catholic Volunteers Bring the Faithful to Lourdes and Lourdes to the Faithful

Every year, 6 million pilgrims visit the Sanctuary of Our Lady of Lourdes in southern France to pray for healing from illness and injury of all kinds. The sanctuary marks the spot where in 1858, 18 apparitions of Mary — identifying herself as the Immaculate Conception — appeared to Bernadette Soubirous. 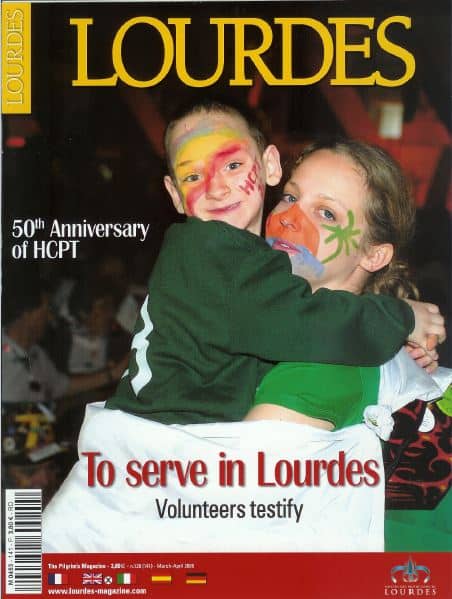 When the American Volunteers Organize Themselves

Marlene Watkins founded a movement of volunteers in North America associated with the Lourdes pilgrimage. Notably supported by Mother
Angelica of the television network EWTN, this new Hospitality movement is developing at an extraordinary rate. Of the thousands of Hospitality members from around the world, just a few years ago less than 100 were from the United States. The impractical ship travel over one hundred years ago did not lend itself well to diocesan pilgrimages or hospitality service. Today, the same flights that bring pilgrims from around the globe to Lourdes can now bring hospitality members, too.

“I didn’t know this until I got there, but everyone who goes to Lourdes is called there,” said Harrell, a Sacred Heart Catholic Church parishioner.

In February 1858, the Virgin Mary appeared to Bernadette Soubirous in the grotto where the shrine is now located. Soubirous, now referred to as St. Bernadette, uncovered a fresh-water spring in the grotto at the request of the Blessed Mother that many believe has healing powers. 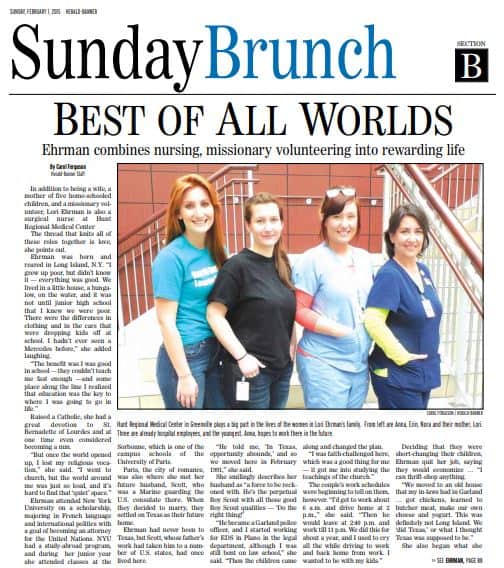 In addition to being a wife, a mother of five home-schooled children, and a missionary volunteer, Lori Ehrman is also a surgical nurse at Hunt Regional Medical center the thread that knits all of these roles together is love, she points out. 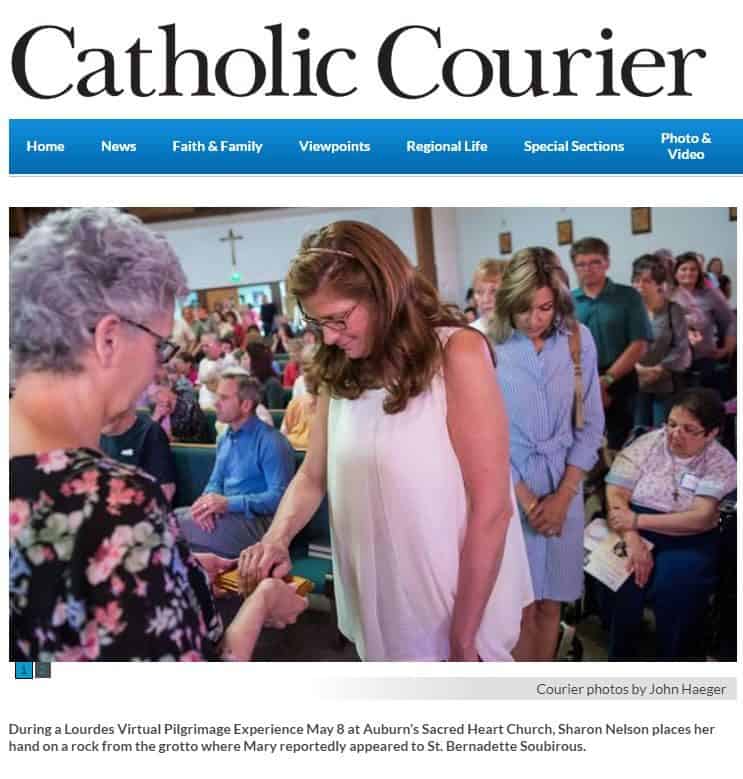 Several hundred people made a pilgrimage of sorts to Lourdes, France, last month without ever leaving American soil.

Instead, they gathered May 8 at Sacred Heart Church for a Lourdes Virtual Pilgrimage Experience presented by Our Lady of Lourdes Hospitality North American Volunteers, which is based in Syracuse. The approximately 300 people present at the Auburn church that evening not only learned about the 18 times Mary reportedly appeared to St. Bernadette Soubirous in Lourdes, but they also were able to touch a rock from the grotto where those apparitions are said to have taken place and bless themselves with water from the spring at the site of the apparitions. 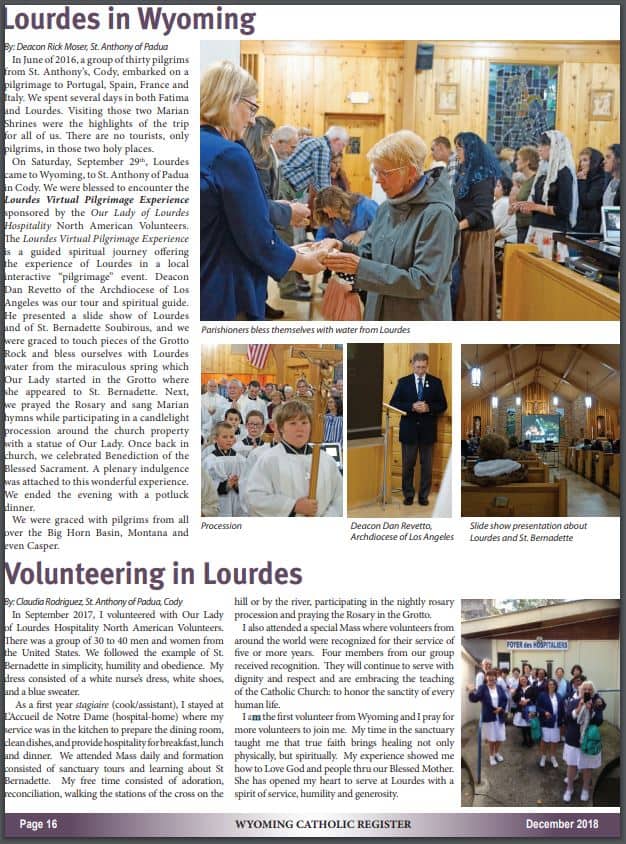 In June of 2016, a group of thirty pilgrims from St. Anthony’s, Cody, embarked on a pilgrimage to Portugal, Spain, France and Italy. We spent several days in both Fatima and Lourdes. Visiting those two Marian Shrines were the highlights of the trip for all of us. There are no tourists, only pilgrims, in those two holy places. 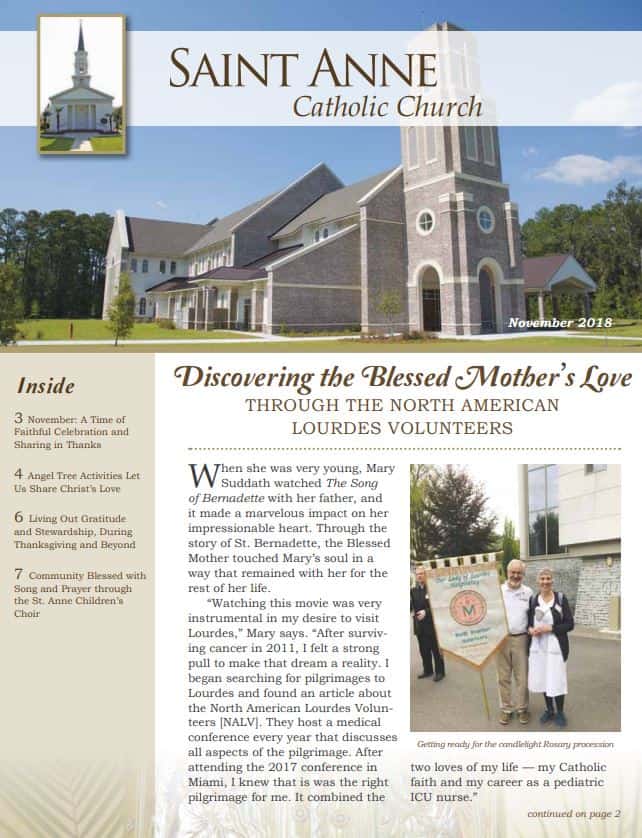 When she was very young, Mary Suddath watched The Song of Bernadette with her father, and it made a marvelous impact on her impressionable heart. Through the story of St. Bernadette, the Blessed Mother touched Mary’s soul in a way that remained with her for the rest of her life. “Watching this movie was very instrumental in my desire to visit Lourdes,” Mary says. “After surviving cancer in 2011, I felt a strong pull to make that dream a reality. I began searching for pilgrimages to Lourdes and found an article about the North American Lourdes Volunteers [NALV]. 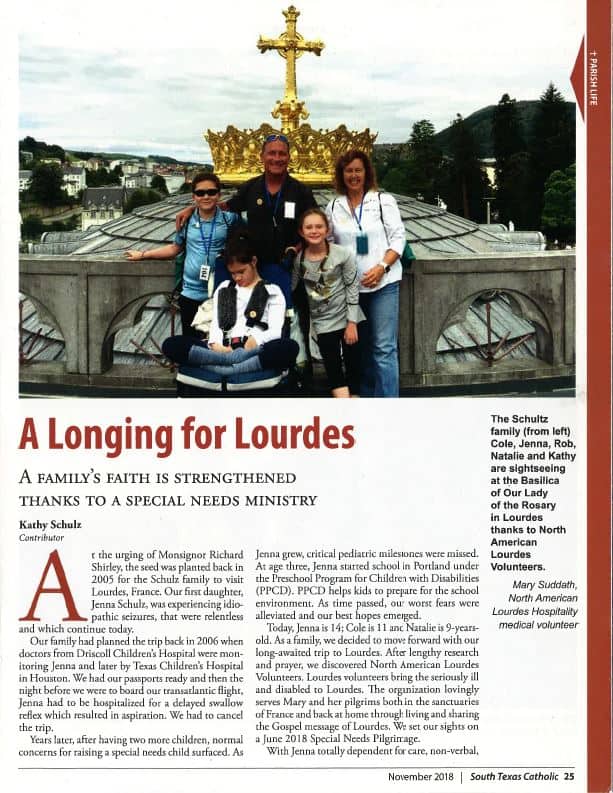 A Longing for Lourdes: A Family's Faith is Strengthened Thanks to a Special Needs Ministry

At the urging of Monsignor Richard Shirley, the seed was planted back in 2005 for the Schulz family to visit Lourdes, France. Our first daughter, Jenna Schulz, was experiencing idiopathic seizures, that were relentless and which continue today. Our family had planned the trip back in 2006 when doctors from Driscoll Children’s Hospital were monitoring Jenna and later by Texas Children’s Hospital in Houston. We had our passports ready and then the night before we were to board our transatlantic flight, Jenna had to be hospitalized for a delayed swallow reflex which resulted in aspiration. We had to cancel the trip. 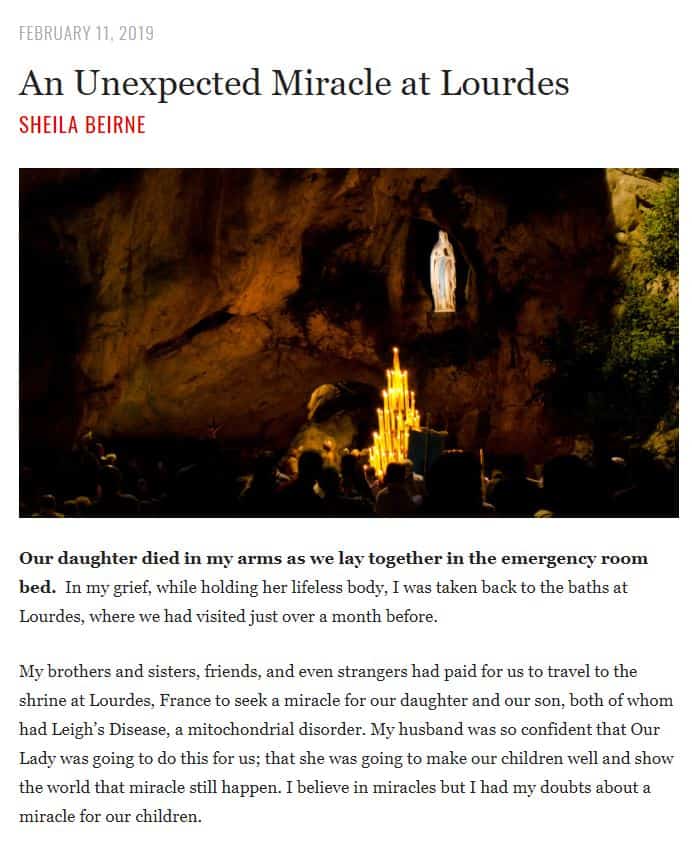 An Unexpected Miracle at Lourdes

Our daughter died in my arms as we lay together in the emergency room bed.  In my grief, while holding her lifeless body, I was taken back to the baths at Lourdes, where we had visited just over a month before.

My brothers and sisters, friends, and even strangers had paid for us to travel to the shrine at Lourdes, France to seek a miracle for our daughter and our son, both of whom had Leigh’s Disease, a mitochondrial disorder. My husband was so confident that Our Lady was going to do this for us; that she was going to make our children well and show the world that miracle still happen. I believe in miracles but I had my doubts about a miracle for our children. 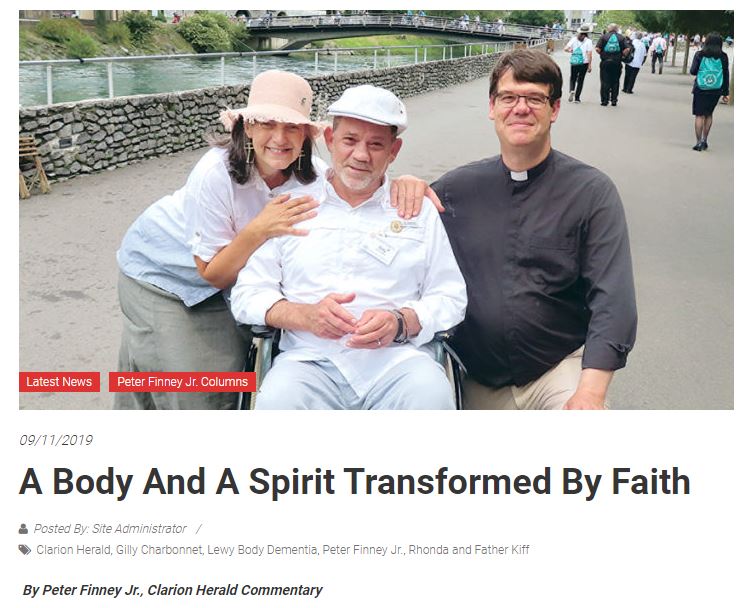 A Body And A Spirit Transformed By Faith

The first inkling Gilly Charbonnet had that something was wrong with his body came when he began having trouble tying his shoes and buttoning his shirt.

For someone who as an expert “key grip” had spent more than 25 years moving heavy lighting equipment and carefully setting up nuanced shadows for hundreds of New Orleans-based movies, television shows and commercials, it was easy just to shrug it off as life after 60.

But when the warning signs accelerated, Gilly mentioned what was happening to him to Father Herb Kiff, pastor of Mater Dolorosa Church, who had presided at Gilly’s marriage to Rhonda in 2018.

“Father Herb said, ‘You need to get that checked out,’” Rhonda recalled.