The western world was so consumed by materialism that God chose a little poor man to make a big change.

“Can’t you see My Church is falling into ruin?” God asked Francis of Assisi.   So the unlikely unknown man got some mortar and started to repair the little building… then, he realized that God meant it was the people—we who are the Church—who needed to be restored from a society of materialism to a world loving God more than status or things. 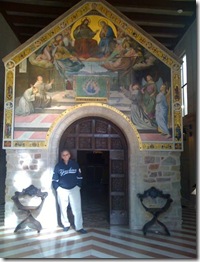 St. Francis lived in the original Porziuncola in Assisi, Italy where he founded the Franciscan Order and wrote their rule; he died there in 1226.  Our Lord granted a favor to his faithful servant and saintly Francis asked this holy favor for us: “I want you ALL in paradise!”  Now it is said that no person who enters the Porziuncola will see the fires of Hell. This is known as the Assisi Pardon.  Pope Honorius III granted a plenary indulgence.

In 2008, an exact three-quarter scale replica of the Porziuncola was opened in the heart of the city bearing the name of the famous saint of poverty, San Francisco.

Pope Benedict proclaimed it one of the five holy places in the world and an indulgence was granted to pilgrims.

Across the country, there is another holy Portiuncula (Little Portion) on the Steubenville campus of Franciscan University in Ohio.  Dedicated in 1987, this year, a plenary indulgence offering was also granted here.

Students are always in Adoration at the Little Chapel.  There is no school assignment, credit hours or extra credit for praying here.  The students are surely earning Heavenly Credit! 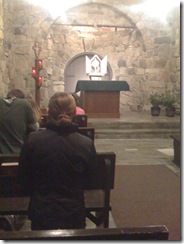 In the thirteenth century, God gave us Francis to teach us to live in the world not of the world.  St. Francis of Assisi gave us the first nativity scene—live in town square—because we forgot Christ IS Christmas.

Five hundred years later, God sent the Immaculate Conception, the Mother of God, to the Grotto at Lourdes to meet Bernadette to remind us to pray for sinners, to do penance, penance, penance… to wash and drink of the spring—to renew ourselves, to love God despite what our current society may tell us.  The Message of Lourdes is for us now.

How privileged we are to bring the Message of Lourdes in 2 states to 2 cities and to be in 2 Porziuncolas in 2 weeks!  God is 2 good!

How blessed we are for the saints, holy people, leaders of our Church: popes, cardinals, bishops, priests and all the Heavenly intervention God has sent to us throughout time when most needed.  God is 2 good 2 us!