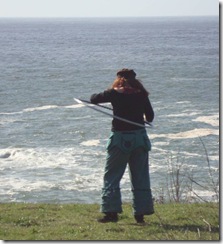 Just think, some guy stayed up one night and invented the hula hoop—now he’s a millionaire!” My sister used to say that when we were younger. She was hoping for that night when we would be smart enough to invent something to wake up rich!

We drove to the coast and there was a lone hula-hooper.

To get to the ocean from the valley in northern California, a mandatory 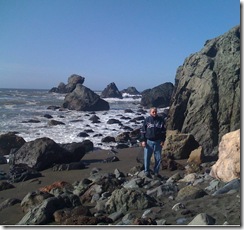 drive through nature is required. Even the fast road (not really a highway) has the most wondrous vistas and views—scenery sounds too much like a painted backdrop for a theatre play. The real drama of the ocean and mountains is far too big a production for a stage.

Words are insufficient to describe meeting the Pacific Ocean in person.

So, if we stayed up all night…

….could we invent just one ocean?

….would we think up a tree or just a leaf?

Could we imagine the salty surf or the thunderous crash of the waves against the land we creatively daydreamed one nighttime? Or the color sky blue or a bird to watch it?

How AWESOME is the beauty of nature? How rich is the smell of the sea, the sound of the air and the sight of land?

Do we even know the name of the man who invented the hula hoop or if he made some money or what became of it? 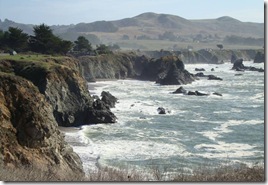 Do we think about the Magnificent Creator of the forgotten man who made the hula hoop one lonely night on a spectacular planet with this ocean on one side and the holy Grotto of Lourdes on the other?

Lord, help me to see you in every-thing, from sea to shining sea. America the Beautiful, God shed His grace on thee…