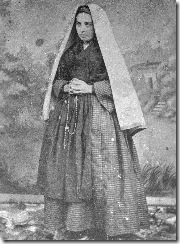 On January 7, 1844, in the little town of Lourdes, the first child of Francois and Louise Soubirous was born.

She was named in honor of her aunt and was affectionately called Bernadette.

In 1858, the Mother of God appeared to little Bernadette 18 times in the Grotto of Massabielle.  She was canonized as a saint in 1933.