In the yoga studio changing room, after early class, Debbie told Cora she was too afraid of dying to fly anywhere, let alone as far as Lourdes. She couldn’t understand why her practical classmate seemed unworried to fly so far away from California to France—just to volunteer?

Cora answered confidently that she was not afraid to die. God could take her anytime. “Are your bags packed?” Debbie asked her seriously. “Yes! My white nurse uniforms to serve in the baths at Lourdes are folded in my luggage. I’m really ready to go to Lourdes—or to go with God. He can take me anytime. My children are grown so I am ready right now.” Cora returned home to prune her roses in the front garden before daily Mass enjoying the warmth of the morning sun.

The bee stung at 11:45 a.m. directly on her neck and it was painful. Cora felt dizzy, but didn’t know why? She had never heard of serious bee sting allergies or reactions and didn’t make any connection between the sting and her dizziness. She went back inside and began to pray her rosary, feeling increasingly dizzy. After four o’clock she was still praying her rosary—as if time had incredibly slowed or was suspended.

Cora called her husband to tell him she didn’t feel well, unusual for his healthy and fit wife. He didn’t hear that she was stung by a bee among the roses, but neither of them knew she was allergic to bees.

morning about being ready to die. She pleaded with the Blessed Mother crying to her, “please forgive me, I’m not ready—I want to see my son when he comes home from Iraq—and I need to go to Lourdes and volunteer for you. She cried as she fell slowly unconscious. 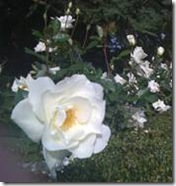 Her husband repeatedly called home with no answer. Worried, he dialed 911. Their neighbor let the paramedics into the house where they found Cora blue and cold to the touch. She was not breathing. The ambulance workers told her husband on the phone they were unsure Cora would make it alive to the hospital. In a coma and on morphine admitted to the Intensive Care Unit, Cora slept. The physicians say it seems impossible someone with such a severe allergic reaction could stay alive five hours after a bee sting.

Two days later, Cora was looking from up above at the pilgrims down below her in the Grotto at Lourdes. They were preparing for the Eucharistic Procession. She could clearly see the tops of the heads of each person getting ready to follow behind the Blessed Sacrament. 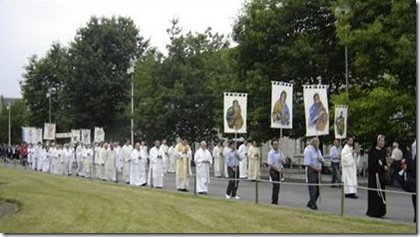 On the third day, from the Intensive Care Unit, Cora called the Lourdes Volunteers office to tell us that when we go from this world to the other world—we just follow Jesus in the Holy Eucharist to Heaven, just like we process at Lourdes—this must be what happens when we die!

Jesus, help me to follow You from this world to the other world….

From her hospital bed Cora promised to make her annual service in the baths, as scheduled during the 150th Jubilee year, confident Our Lady would give her the strength to do so—and she did… 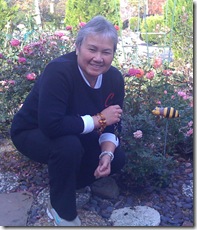 Cora will make her Commitment in the Service of the Piscines at as a North American Lourdes Volunteer as a Pisciniere with the Hospitalte Notre-Dame du Lourdes in 2010.

Her husband, Michael, will join Cora at the daily Eucharistic Procession and offer his first week of service next July honoring the Blessed Mother and her Son.

“Grant us your tender devotion to Mary, mother of Jesus and our Mother, Accompany us on our earthly pilgrimage toward the blessed Homeland, where we too, hope to arrive to contemplate forever the Glory of the Father, the Son and the Holy Spirit.” Amen. Pope John Paul II